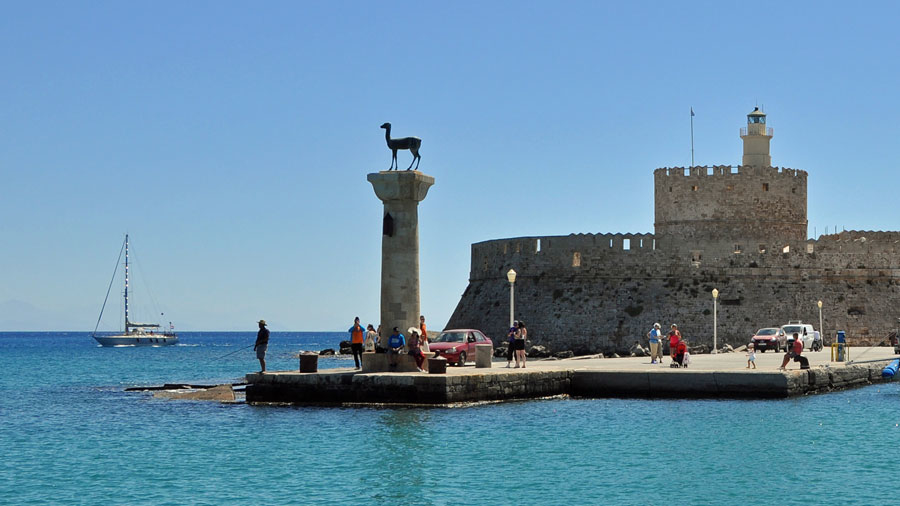 Exploring the island of Rhodes, where Paul visited in the Bible

“Tradition, tradition! Tradition!” Tevye belts out in the opening song of the musical Fiddler on the Roof. In the world of Biblical archaeology, tradition can sometimes prove helpful. But as travelers on the recent BAS tour “Sailing with Paul in the Mediterranean” discovered, tradition can also provide a false trail.

We departed from the Turkish city of Marmaris and motored in our wooden-hulled gulet (schooner) to the Mandraki harbor on the Greek island of Rhodes. The visit was exciting for me, since I had never visited Rhodes before. Paul stopped at Rhodes during his third journey while returning to Jerusalem (Acts 21:1). But where? One purpose of our visit was to examine the historical and archaeological evidence related to his stopover.

Our Greek guide Maria met us on the quay to begin our walking tour of the town. At the base of the Crusader Castle near the shore, she pointed out where archaeologists believe the Colossus of Rhodes had stood. Completed around 280 B.C.E., this 100-foot-tall bronze statue of Zeus was one of the seven wonders of the ancient world before an earthquake toppled it in 226 B.C.E. Did Paul try to wrap his arms around one of its gigantic thumbs during his visit? Maybe, if this was where Paul had stopped. Tour highlights included visits to the impressive archaeology museum housed in the Hospital of the Knights of St. John built in the 15th century. At the Palace of the Grand Master a permanent exhibition presented the Hellenistic and Roman history of Rhodes. The polis was founded in 408 B.C.E. as a synoecism, or amalgamation of the island’s major towns. A major factor in locating the new city on the island’s northern tip was its five harbors. A map displayed in one hall illustrated these harbors: West, Military (Mandraki), Great, Acantia and South.

The next morning Maria led our BAS group on a 30-mile bus excursion down the eastern coast to Lindos. This ancient town is situated spectacularly on the rock acropolis of a small peninsula that overlooks the sea. Our first stop was at the so-called St. Paul’s Bay. Tradition states that Paul’s ship sought shelter in this small, sheltered harbor during a storm. The archaeological guide to Lindos produced by the Hellenic Ministry of Culture studiously omits any reference to such a visit. Yet a large sign and a small Christian chapel pointedly remind visitors that this is where Paul stopped in 57 C.E. Lindos was an archaeological highlight of our visit to Rhodes. I was particularly impressed by the relief dating to 180 B.C.E. of a trihemiolia carved into the rock near the base of the acropolis. This military vessel was developed by the Rhodians to counter the swift warships of the pirates. Even after the Romans abolished their navy in 46 B.C.E., the Rhodians continued to display a few as ceremonial vessels. So Paul undoubtedly saw such ships in the Rhodes harbor during his visit.

Sometimes tradition can point us toward history. But in the case of Rhodes the tradition about Lindos is dubious. Instead history suggests that Paul actually landed in Rhodes town. Why would the captain of his coasting vessel sail the extra distance to Lindos when some of the Mediterranean’s best harbors were at hand? In his account of this voyage in Acts 20–21, Luke names specific harbors, not just the general names of islands. And Patara, the next stop on the Anatolian coast, lay directly east. As our BAS group sat on the deck and bid farewell to the harbors of Rhodes, our gaze fell upon the same waters that welcomed Paul some 1,950 years ago.