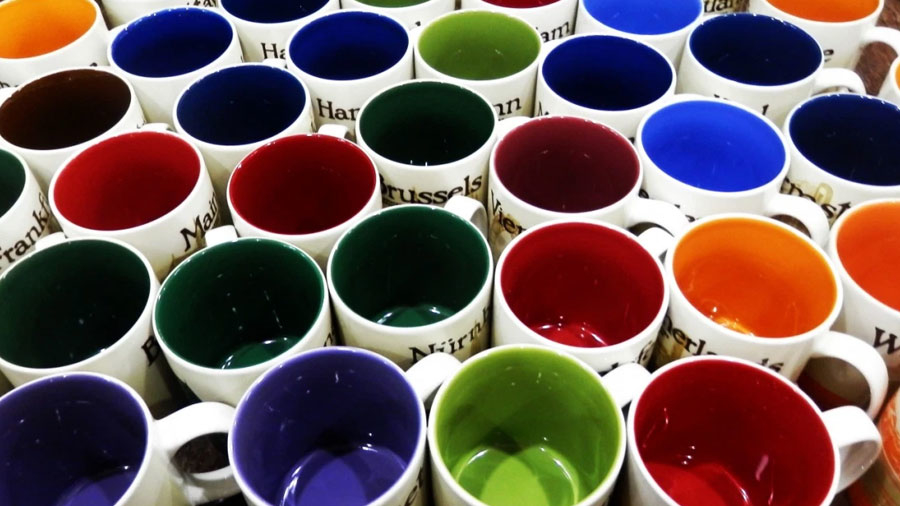 Participants on my tours buy a variety of souvenirs—olive-wood crèches in Bethlehem, ceramics in Corinth, carpets in Ephesus and parchment in Pergamum. These days, however, I usually bring home only one thing—Starbucks mugs featuring archaeological sites.

On a recent trip to Crete I visited ancient Kydonia. Walking around the historic port of modern Chania, I saw the familiar Starbucks symbol. After drinking a cup of Ethiopian blend, I spotted a lacuna in my collection—Crete. The mug depicted the Minoan palace at Knossos. On this trip I also picked up the Rhodes mug showing the Doric Temple of Athena Lindia at Lindos. Paul visited both islands on his journeys (Acts 21:1; 27:7–13).

Starbucks has no shops in either Italy or Israel, so they are unrepresented in my collection. However, Turkey, Jordan, Greece and Cyprus are amply represented.

The city mug belonging to my hometown Antalya, ancient Attalia (Acts 14:25), depicts the temple of Apollo in Side. Only six columns still stand at the temple, which is now under restoration. A second Antalya mug depicts the theater at Aspendus (see below), the best-preserved Roman theater in Turkey. With a capacity of 7,000 persons, it still holds operatic performances. The back of the mug shows the falls of the Katarrhactes mentioned by the geographer Strabo, which today cascade over 100 feet into the Mediterranean Sea. Nearby is Magydus, the seaport of Perga, where Paul arrived in Pamphylia (Acts 13:13).

The Ankara mug shows its ancient citadel with walls dating from the Hellenistic to Ottoman periods. Ancient Ancyra, Turkey’s capital today, was formerly a Galatian center before becoming the capital of the Roman province of Galatia in 25 B.C.E. The colorful mug from Bodrum (ancient Halicarnassus) displays the Castle of the Knights of St. John on the back. Built with stones from the Tomb of Mausolus, one of the seven wonders of the ancient world, the castle now houses the noted Museum of Underwater Archaeology. Last but not least, the Turkey country mug shows the monumental heads of King Antiochus and some of the Commagenian gods standing on Mount Nemrut. This tumulus, 161 feet tall and 499 feet in diameter, was constructed in the first century B.C.E. and is a UNESCO World Heritage Site.

The Cyprus city mug shows the Greco-Roman theater at Kourion. Situated with its breath-taking view of the Mediterranean, it could seat some 3,500 spectators. The excavations there are now being led by my friend Tom Davis. A second Cyprus cup shows a rock-cut chamber from the Tombs of the Kings in Paphos, also a UNESCO World Heritage Site. Paul visited Paphos on his first journey (Acts 13:6).

The Jordan mug shows the Artemis temple at Gerasa (Jerash) completed during the reign of Antonius Pius. Eleven columns of the hextastyle portico still stand. Situated on a high point, the temple dominated Gerasa’s landscape.

On Thessaloniki’s city mug is its iconic structure—the White Tower. Although dating from the Ottoman period, it still reminds me of Paul’s multiple visits to the city (Acts 17:1; 20:2–3). Missing from my Greece collection, however, is the country mug depicting the tholos at Delphi and the Athens city mug showing the Parthenon. Hopefully on a future visit I can locate them.

I haven’t visited Egypt or Lebanon yet so more of the Biblical world still awaits me. Since the Starbucks mugs from these countries also feature archaeological sites, I look forward to adding them to my collection. It’s wonderful that this Seattle-based coffee vendor has put the archaeological wonders of the eastern Mediterranean on its mugs. Coffee drinkers like me get to appreciate them anew each time we take a sip.