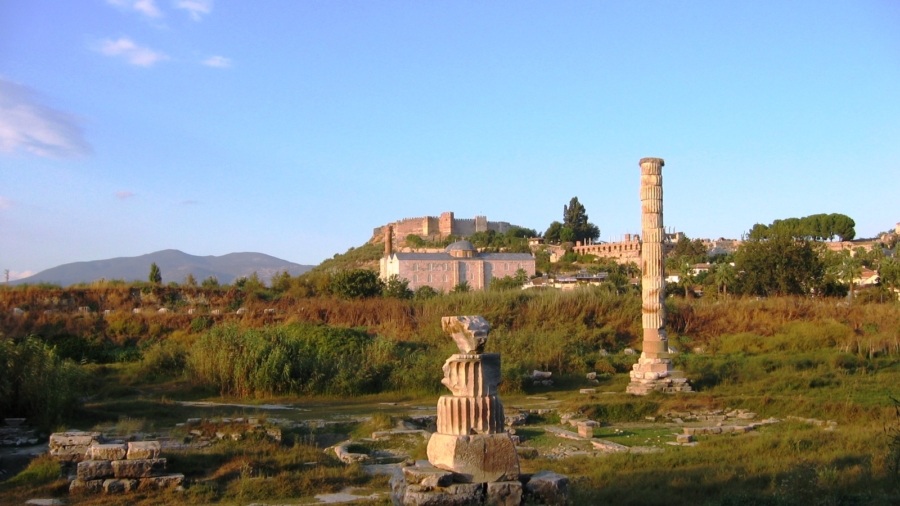 The burning of the Ephesian Temple of Artemis by Herostratus

The apostle Paul, writing from Ephesus to the Christians in Corinth, warned: “If anyone destroys God’s temple, God will destroy him; for God’s temple is sacred, and you are that temple” (1 Corinthians 3:17).

July 21 marked the anniversary of one of the most infamous destructions of a temple in history. On that night in 356 B.C.E., an Ephesian named Herostratus set out to make his mark in history. He walked to the Temple of Artemis with fire and flammable materials with the intention of burning it down.

The construction of this temple, which is one of the Seven Wonders of the Ancient World, was sponsored in part through the benefaction of Croesus, the wealthy king of the Lydian empire. Begun around 550 B.C.E. under the direction of the Cretan architect Chersiphron and his son Metagenes, 36 of its columns were decorated with relief carvings, according to Pliny the Elder. A massive structure—it was 377 feet long and 151 feet wide, the size of a football field—it was supposedly the first Greek temple built of marble.

Herostratus must have been an unhappy man who had failed to achieve honor and status in Ephesus. So he became determined to put his name in the history books. Herostratus knew that he could not do much damage to the marble itself. However, if he could get to the wooden furnishings inside the temple, he would have a great chance of success.

Sneaking past the temple guards, Herostratus placed the rags in key places inside the naos, the inner sanctuary. He then lit each one, probably using the small flame from the olive oil lamp he would have carried. Soon fire was raging with flames climbing up the wooden beams to engulf the wooden ceiling. Even the cult statue of Artemis, made of ebony or grapewood by the noted Athenian sculptor Endoios (also spelled Endoeus), was burning. By morning all that remained was a smoldering ruin of 40-foot high columns.

Instead of fleeing the scene, Herostratus was boastful about his deed. He surrendered to the temple authorities and was imprisoned. Ephesian officials, to discourage similar acts in the future, quickly executed Herostratus and attempted to remove his name from memory by forbidding its mention under penalty of death. However, an ancient historian named Theopompus recorded Herostratus’s arson in his book Hellenics. The arsonist’s name that the Ephesians had tried to erase has thus been preserved to this day.

Later Greek and Roman tradition states that Alexander the Great was born in Macedonia on that same night, July 21, 356. The Roman historian Plutarch suggested in his Life of Alexander that the goddess Artemis was so busy attending to Alexander’s birth that she failed to protect her temple. Alexander later tried to pay for the temple’s rebuilding, but was told by Ephesian officials that it was not right for a god to build a temple for another god.

Herostratus’s destruction of the Temple of Artemis led to the coining of the phrase “Herostratic fame” meaning someone who commits a criminal act in order to receive the notoriety that follows. And reference to him and his arson has appeared in the works of noted authors such as Chaucer, Cervantes and Sartre.

The Temple of Artemis that stood during Paul’s visits to Ephesus was the successor to the one Herostratus had burned down. Is it possible that Paul and his audience in Corinth knew the story of Herostratus and his infamous destruction of the Temple of Artemis? I think it is probable that this incident was in mind when Paul wrote the well-known verse (quoted above) to the Corinthians. He was accusing them of perpetrating a similar shameful act: destroying the temple of God in Corinth—the church—through their immature and immoral behavior.