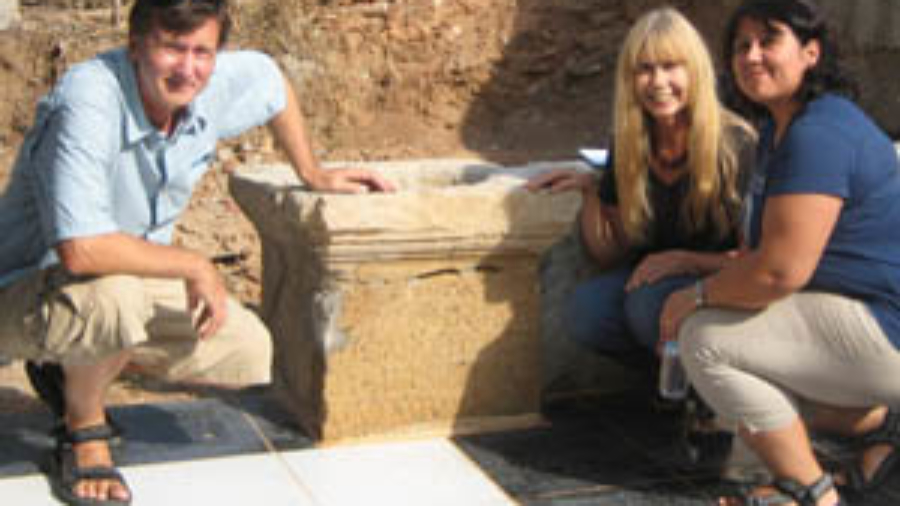 One thing I enjoy about living in Turkey is the serendipitous discoveries waiting to be found. Last year as my wife and I were returning from the grocery store, I looked into a garden and saw an ancient stone standing there. The top had later been hollowed out as a basin. As I walked through the gate, my heart was racing in anticipation: Would there be an inscription on its face? Sure enough there was! In well-cut Greek letters five lines stood out (the remainder of the inscription was buried beneath the tiled walkway). Two words jumped out in my initial examination: anthupaton Pamphylias, that is, “the governor of Pamphylia.”

Anthupatos is the Greek word for the proconsul who governed a Roman senatorial province. Acts 13:7 describes how Paul and Barnabas met Sergius Paulus, the anthupatos of Cyprus.

Pamphylia means “land of all tribes” and originally designated the southern region of Asia Minor along the Mediterranean Sea. Later it became the name of a Roman province. Jews from Pamphylia were among those in Jerusalem on the day of Pentecost (Acts 2:10). Paul and Barnabas, after leaving Cyprus, made landfall at Perga, a major city of Pamphylia (Acts 13:13). At the end of the apostles’ first missionary journey they departed from another Pamphylian city, Attalia—modern Antalya—where I live (Acts 14:25). Like many civic degrees the demos and boulē (“the citizens and the council”) were the dedicators of this inscription, in this case for an eminent governor of the province, Julius Tarius Titianus.

To learn more about this inscription, I contacted the epigraphy department of the local Akdeniz (“Mediterranean”) University. There I was put in contact with Dr. Nuray Gökalp, an epigrapher presently preparing the corpus of inscriptions for Attalia. I emailed her pictures of the stone, and she quickly acknowledged that the inscription was unknown to her. Two days later we arranged a meeting. She brought a colleague, and it was exciting for me to see their excitement as they saw the inscription for the first time. Dr. Gökalp suggested at the time that the next line, now buried below ground level, undoubtedly said “and Lycia.” This region, west of Pamphylia, had been a double province with Pamphylia for over a century. After cleaning and wetting the stone, the epigraphers made a squeeze, a process that uses special paper to produce an impression of the surface’s texture. As we said our goodbyes, Dr. Gökalp promised to share the results of her investigation with me.

Those results have just been published by Dr. Gökalp in a short essay in the journal Gephyra. The inscription is now firmly dated to the early third century C.E. The governor’s name was first found in the 19th century on an inscription dating to 202–205 C.E. in a bathhouse at Takina.

The noted archaeologist William Ramsay was one of the first scholars to publish this inscription. Until now, however, it was unknown whether Takina was in the province of Lycia-Pamphylia or in Asia. Most scholars thought the latter. The new inscription now definitely proves that Takina was in Lycia-Pamphlyia and that Tarius Titianus was the governor of this province and not of Asia. Another inscription mentioning Tarius Titianus, dating after 210 C.E., was recently found in Hippos, a Galilean city that was part of the Decapolis.* It turns out that he later served as the governor of Syria–Palestina. It is amazing to me that five lines of text with only 11 Greek words can tell us such a story. And to think that there are many more such stones still awaiting discovery. So my eyes are always on the lookout, waiting to find another one.