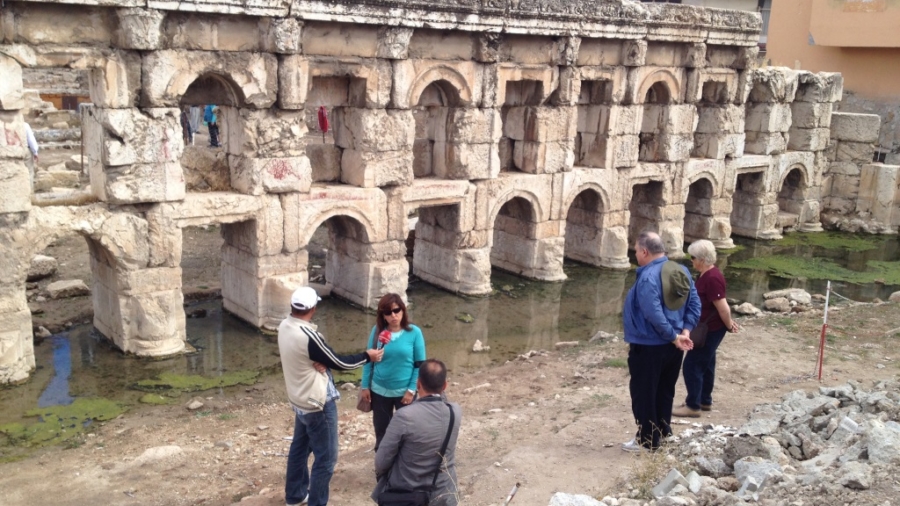 Basilika Therma. Photo: Mark WilsonOrganizing and leading archaeological tours in the Middle East can be challenging, given its unstable political situation. Two years ago when I planned that the BAS Abraham Country’s tour begin in southeastern Turkey, I was unable to divine that in mid-September 2013, a perfect political storm would develop. Ten days before the tour was to begin, the U.S. State Department issued a travel warning that strongly discouraged nonessential travel to the region. The American embassy in Ankara told me by phone that the consulate in Adana was closed and that there would be no support in the region should an incident occur. The reason: the anniversary of 9/11, the anniversary of the consulate deaths in Benghazi and the threatened air strikes in Syria. So we were forced to cancel the Urfa-Tarsus portion of the tour. I quickly revised the itinerary, and Tutku Tours scrambled to make new domestic flight and hotel reservations. Needless to say, the registrants were greatly disappointed that these last-minute adjustments had to be made, because they had looked forward to visiting the archaeological wonders of southeastern Turkey. Despite this, 21 of 23 of them still decided to come.

The upside was that the group got to see other significant archaeological sites. At Limyra, Austrian archaeologist Martin Seyer gave a personal tour of the site, including a look at a possible synagogue discovered at the city’s East Gate. A visit to the Neolithic site of Çatalhöyük helped assuage the disappointment of not seeing Göbekli Tepe. Ours became the first American group to visit the new excavations at Derbe with a personal tour provided by student archaeologists from Konya University. Our “brief” stop at the Roman bath complex at Basilika Therma (Sarıkaya) turned into an interesting cultural experience. The local Turkish Radio and Television (TRT) reporter showed up and interviewed our guide Meltem Çiftçi and me. According to the archaeologist from the Yozgat Museum, we were likewise the first American group to visit this new excavation.

The final stop on Day 5 was at the nearly mile-high fortress of Kerenes Dağ (Mountain), tentatively identified by its excavators as ancient Pteria of the Medes, a city best remembered from Herodotus’s accounts of the campaigns of the legendary king Croesus. The Medes are well known from the Bible with Darius their most famous king (Daniel 5:31; 11:1). In 612 B.C.E., the Medes allied themselves with the Babylonians and overthrew the Neo-Assyrian kingdom. They then expanded westward into central Anatolia. Led by King Cyaxares, they engaged the Lydians under Alyattes II in a five-year war that culminated in the “Battle of the Eclipse” on May 28, 585 B.C.E. The eclipse was interpreted as a heavenly sign that hostilities should cease, so a peace treaty was brokered. The Halys (Kızılırmak) River became the Median kingdom’s western boundary and Pteria its western capital. Kerkenes Dağ is the largest Iron Age city discovered on the Anatolian plateau. As our group climbed into the city, we could see part of its 4.4 mile-long defensive wall made of solid, uncut stone that is visible from space. Most impressive was the excavated Cappadocian Gate with its glacis walls and entrance with five towers. The city is believed to have been burned and abandoned a generation after its founding, when the last Median king Astyages was overthrown by Cyrus the Great in 550 B.C.E. The Medes were then absorbed into the Achaemenid Empire, and with the Persians became its two most important peoples (Daniel 5:28; 6:8, 12, 15).

None of the aforementioned sites were in the original itinerary. By the tour’s end, the participants expressed enthusiasm with the new agenda and the outstanding sites they had seen. So the serendipities of archaeological travel can sometimes provide alternative gems.